Election Day was always a traumatic event around our house. Even though I was so little at the time, I knew that something important was going on. Never mind the fact that everyone we knew in our conservative, strait-laced little town voted a straight Republican ticket, there was always drama in the air.
Usually it started at dinner (known as “lunch” in some parts of the country). Grandfather would announce that today was The Day. Then would begin the comments that would become a family tradition.
Grandfather would lead off: “There’s nobody worth voting for.”
Mother would then counter: “There are some good people on the ticket.”
“Hrumph.” (His standard reply.)
“But -”
“If a person is a politician, you can’t trust ’em. Who would want to boss people around and get their picture in the papers and ride around in parades all the time? Nobody decent. And where do they get the money for all those signs they won’t even bother to pick up for months?”
My little-girl logic thought this was a good argument.
Then my father would counter with: “But some of the people on the ballot are better than others. You can’t let the bad ones win.”
“They always have, haven’t they?”
“Still, we have to vote. Some of those people are known crooks and some are probably fine men.”
“Name one,” was Grandfather’s perennial retort.
Then Father would get that look on his face. “Well, if it’s so meaningless, why are you going to vote?”
“It’s my Christian duty. I fought in the Great War and I intend to do my civic duty.”
Grandmother would just sit there and not say a word. After battling a chicken and cooking all morning, she was too tired to care.
Finally, always in the late afternoon, everybody would start getting dressed up, primping to go to the polls and vote. The arcane rituals of the voting booth evidently required Sunday-go-to-meeting outfits.
Inevitably we would be nearly dressed when somebody would ask the dreaded question: “Did we pay the poll tax?”
Four grown, mentally stable adults would freeze with anxiety.
“I thought—”
“Didn’t you—”
After a frantic search,  the check register would reveal that we had indeed paid this mysterious fee. At last we would pile in the car and chug off to the polling place.
At that time everybody in our little town pulled a lever and voted a straight Republican ticket. Those were the days when one motion would place a vote for every Republican or Democrat on the ticket, from President to Dogcatcher. If you didn’t want to think and had a vague prejudice toward one party or another, it ended all effort of studying the candidates individually.
One morning after the predictable results were printed in the newspaper and it was being passed around as if it were some sort of surprise, it occurred to me that I had no idea what this “poll tax” actually was.
“Papa, what’s a poll tax?”
You’d have thought I had questioned the existence of the Deity. Evidently no one had ever thought about it. There was a long silence.
“Well,” Father said, “I suppose it’s to pay for the expenses of putting up the tables and maybe the paper for the ballots—things like that.”
Grandmother puzzled this one over. “Then why doesn’t everybody just write down who they want, take it to the courthouse, and save them the money?”
Grandfather gave her one of those looks. “You might accidentally write down a Democrat.”
“No I wouldn’t—you always tell me who to vote for.”
Suddenly Mother,who held a degree in sociology, dropped a bomb into this discussion. “It’s to keep the riffraff from voting.”
Now grandmother was insulted. “There is no riffraff in this town! Besides, the riffraff are usually the ones with all the money!”
“The town drunk?” I piped up, having heard about this supposed town staple by watching too many Westerns.
Father was shocked. “This is a dry county! Nobody drinks here!”
Grandfather stifled a snort.
“Well, then what is the poll tax for?” Grandmother pressed.
There was a long silence and a lot of knit brows.
“Well, you have to be able to read, too….” Grandmother finally offered, shocking us by this sophisticated knowledge of the voting laws.
This was a good point, except that everyone we knew over the age of six could read. We finally dismissed it as irrelevant.
Finally we gave up. Nobody knew. I gave the mystery no more thought.
It took a Constitutional Amendment to clear up the matter and make us all feel ashamed. 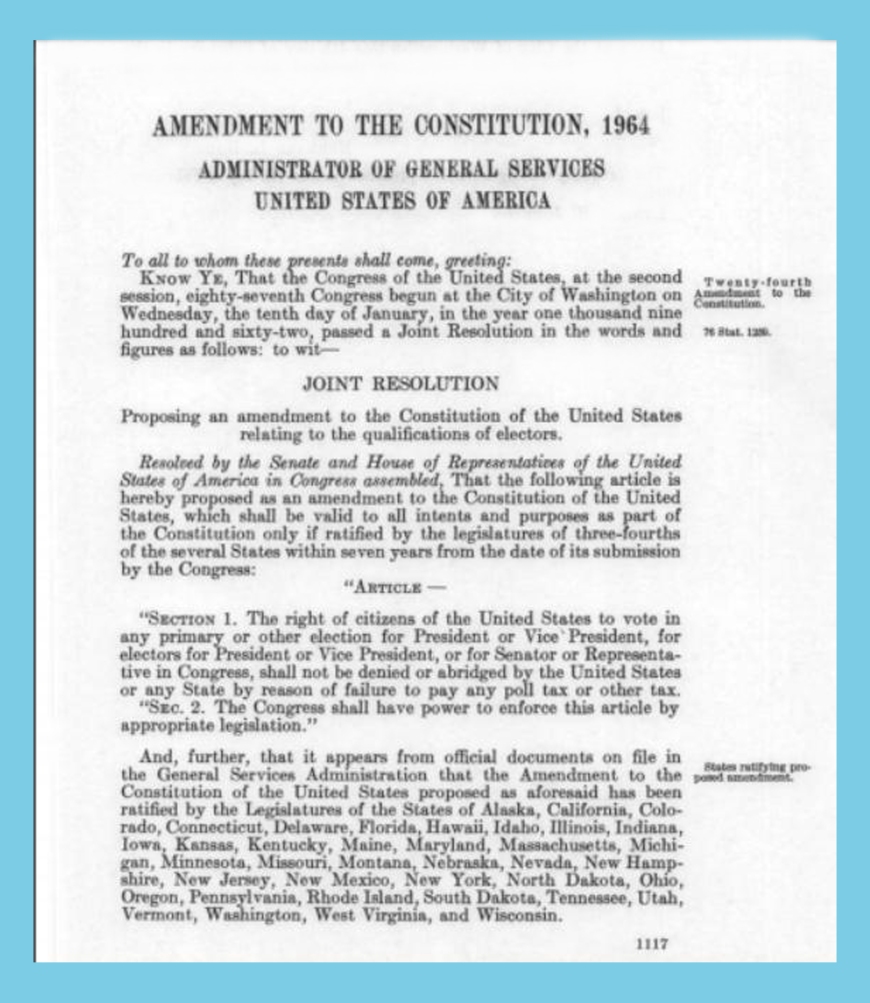 The Twentieth-fourth Amendment to the Constitution of the United Stated was ratified in 1964, abolishing the poll tax forever.

A few years later the poll tax, which had been in existence somewhere in the world since ancient Egypt, was swept off the books by the 1964 ratification of the Twenty-fourth Amendment.
We were glad to see it go. Not only was the yearly anxiety over the thing gone, but we learned the real reason for its existence: to keep Black Americans away from the polls. The “riffraff” had voted all along, while many of our friends of a different skin color had been hard-pressed to come up with the $1.50 to $2.50, which we thought of as a little bit of money. In today’s currency, it would be about the price of four Big Macs.
Grandmother was right:  everyone should have just written it all down and taken it to the courthouse. It would have been the fair and decent thing.

For further reading:
“Historical Highlights of the 24th Amendment” at the United States House of Representatives History, Art, and Archives. It includes interesting related links.
The National Conference of State Legislatures  has a history of straight-ticket voting, which is still around.